2019 has been a very busy year for our author and 2020 looks set to be another. Who could have guessed that even 36 years after his passing he would still be making headlines, having new work published and gaining new fans from around the world? It has been a pleasure to offer a window onto this exciting time and give readers old and new an insight into the writer who overcame so many set-backs to achieve so much.

May we wish everyone a happy and peaceful season of festivities. Stay safe.

Happy to report our original web-address has been restored. The domain registrar has done their stuff (though didn’t apologise) and all should be fine now. Also, because a lot of browsers these days require a secure connection, the URLs will now change as each page is navigated – and include the padlock symbol in the address bar to confirm. Thank you for your patience.

We are aware the unique web-site address for Desmond Bagley has “disappeared”. The first time since 2004 there’s been a problem. We’ve been in touch with the registrar, but so far, no news. Apparently there is now no trace of it on our account and their support engineers do not check any messages at the weekends. Our apologies for the disruption and we’ll post an update as we learn more …

This famous festival runs from the 11th to the 15th September 2019, in and around Torbay in Devon, England. On the 12th at 4pm in Torre Abbey Michael Davies, the author who polished "Domino Island" for final publication, will be giving a presentation about his work on the novel. The International Agatha Christie Festival

Domino Island has been such a hit with fans new and old that in May 2020 it is due to be published in paperback format.

The paperback follow-on is something you can never take for granted in the cut and thrust of the publishing world. There are a lot of authors vying for the same space on bookstore shelves and it’s getting crowded. But the artwork is in and matches the other 16-novels perfectly. Take a look. Retailers are already listing it for pre-order. 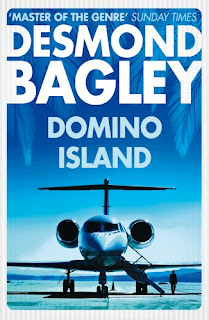 A big thank you to readers new and old who have picked-up the baton and spread the word! Let’s bring more fans onboard.

At this point we need to thank a tireless TeamDB:

David Brawn, the Estates Manager at Harper Collins, Michael Davies, the writer who polished the manuscript for publication and of course Philip Eastwood without whom the story may never have come to light.

The eagle-eyed amongst you may have noticed that Amazon UK has paperback versions of Domino Island listed as available, along with the hardback and audiobook.

Actually it is only third-party sellers offering the paperback, not Amazon itself, and the reason is pretty straightforward. There is no official paperback yet and probably won’t be for another year or so (depending on sales figures).

So what are the six sellers (that we’ve counted so far) actually offering?

It is most likely they are selling the advance proof copies that were sent out to journalists and reviewers prior to the book being finalised and error-corrected. If this is so, these books might just be of interest to collectors. However until we get confirmation, here at Bagley Towers, we are just as confused as anyone else!

1) Publication of the Audible audio-book has been brought forward at last, to the 11th May. Take a look: Domino Island Audible edition. 2) Martin Edwards, well-known and respected crime writer has posted a generous review of Domino Island. Check it out: Do You Write Under Your Own Name?

We’ve been waiting a long time for this, but we’re finally happy to announce:

New novel ** Domino Island ** is now available to purchase from your favourite outlet. Post permitting it should also be dropping onto the doormats of readers who pre-ordered.

After all the hard work of those involved it’s finally here! A previously undiscovered novel by our world-wide best-selling author is available to fans new and old. Such a very rare treat for all readers!! 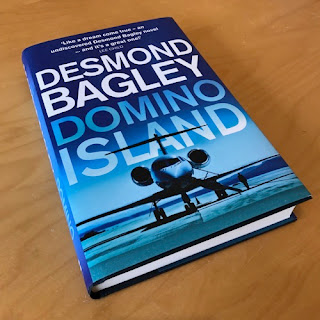 A big thanks go out to: