Each title is available in paperback, e-book and audiobook format.

Back in 2009 they had been published in pairs, also by Harper Collins UK and each book contained extra content such as short-stories or magazine articles

In the 1990's they had been in print almost continually since they were written, some in their 20+ reprints 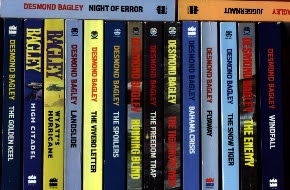 The first year on each line is the date of hardback publication, the second is paperback:

Educational Titles for those learning English:

This was a short story published in January 1957, in the Argosy short story magazine. In reality this was more of a paperback book, about the size of a conventional novel. The story appeared as the first in the book, along with such other notable writers as H.E Bates, Paul Gallico and Victor Canning.

It is set in New Orleans, mostly in a music shop where the proprietor ekes out a living refurbishing jazz instruments for local players. Occasionally he gets to clean instruments belonging to the stars, like Louis Armstrong.

One day a stranger appears in his shop and shows a fascination for a trumpet that belonged to the owner's father. From here the story builds around the mystery of who the character called Jake really is and why he is so persistent.

This is not a story in the expected Bagley mould, perhaps because this is an early publication. In fact I would characterise this more as a fantasy or science-fiction tale. Certainly the end will take the reader by surprise.


House of the Lions


A story written to entertain Bagley’s Christmas guests in 1966 while he was living in Totnes, Devon. Although fictional it is based in and around his home, which had a long and interesting history ...

Not published until Harper Collins reprinted all the titles in 2009. You’ll find this story in The Spoilers/Juggernaut book.


A Matter of Months


This story was written especially for the "Winter's Crimes vol 8" anthology, originally published in 1976 and again in 1977 by the Book Club Associates.

It is a splendidly well thought out piece of detective work, although not for the down-at-heel policeman who so frustratingly fails to get his man. The reader can sit and revel in the ingenious twists and turns as the author proves he could easily write a whodunnit if he wanted to.

Just when you think you have figured out the crime, just when all the evidence points in one direction, it switches and points the other way. Re-reading the story to pick up on all the nuances you missed the first time round shows that they were indeed there all along.

The title of the story explains a lot, though whether you believe one suspect or another was the culprit hardly matters. This is a word-game, written by an author who didn't usually venture into this area.

Incidentally a lot of web-sites mis-quote the title of this story as “Mouths”. They are incorrect.

The Circumstances Surrounding the Crime


This is an insightful piece written many years after the event and sheds light on a period in Bagley’s life when he was a roving, freelance reporter in Johannesburg, South Africa. It also casts light on the unique relationship he was to forge with his then girlfriend and later wife, Joan Brown.

In 1960, just before South Africa was to leave the British Commonwealth, the attempted assassination of Prime Minister Hendrick Verwoerd found Bagley the only available reporter on the spot. This is the inside story of a “scoop” and one the Bagley’s were both instrumental in obtaining.

The article was reprinted in the Flyaway / Windfall print of 2009.

A Little Peace of Britain

In Britain magazine explored the delights of the country and was produced by the British Tourist Authority, aimed at visitors and tourists but equally a good resource for anyone keen to learn more about their surroundings. It is now known simply as Britain magazine and a part of the larger Visit Britain web-site resource.

An article by Bagley called "A Little Peace of Britain" was published in the 24th February 1980 edition but unfortunately back-issues are no-longer available. However the advent of the Internet has made finding one a lot easier.

The subject was a quick tour of the island of Guernsey where the author had made his home in 1976. He clearly loved the place with its quaint social idiosyncrasies and enjoyed the relative peace and quiet, the climate and easy access to the sea. The fee he received for his article was donated to the Royal National Lifeboat Institution.

** Happily this article has just been re-published ** as a part of Philip Eastwood's The Bagley Legacy project on the Visit Guernsey tourist information site.

For more background to the original, the magazine can be found indexed rather wonderfully, but unofficially (clearly a labour of love) at:

Libraries are particularly good places to find these titles and they tend to last a long time. Larger bookshops too often have dedicated audiobook sections. However all the newest versions have been published as download only.

With the 2017 rerelease of all of the authors novels, Paul Tyreman has been working his way through the canon, reading each novel in unabridged format. As far as I can tell the only one left to read now is The Snow Tiger, a trickier title than most as it is in the third-person.

These new versions are available from Audible, a subsidiary of Amazon, via their subscription service.

Previously titles were available on cassette-tape from Soundings Audiobooks, Chivers Press, Hamlyn's Books on Tape and Listen for Pleasure, but these are now harder to find. Second-hand and charity shops are now our best bet for actual, physical media.

A few cassettes are still available at Amazon UK, from third-party sellers and eBay is much the same, but the prices seem high.

For a short time there seemed a real possibility there was a complete missing novel, and this set me off on a Sherlock Holmes-like hunt for it. The details were given in a book called "20th Century Crime and Mystery Writers" edited by John Reilly and published in 1985 but sadly now out of print.

Christian Henriksson, who runs a web site called the Big Mystery Bibliography Page, came to my help with details from this guide of which he has a copy. It seemed initially that the elusive book, "The Legacy" listed as having been published in 1982, might not have been published in Britain. This seemed very unlikely as all the other titles had been published there before anywhere else. After a lot of enquiries to international publishers, and with a little help from my friends, it turned out that this 'missing' book was in fact "Windfall", the officially released book for 1982.

In translation from language to language confusion must have crept in. Arvet - the Swedish word translated for Windfall, also means a Legacy. In English, not the easiest of languages, Windfall can have the split meaning of something blown on the wind - as in the balloon theme of the story - and a large unexpected inheritance - a legacy - which is also a key plot motif. I guess that a reader somewhere must have misinterpreted the evidence.

The mystery is over now but for a long while many web-sites listed Legacy as a published title.