A Death in Paradise murder-mystery 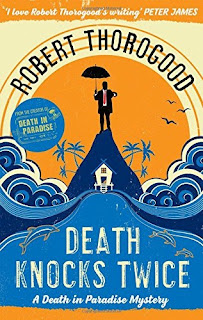 Robert Thorogood is the creator and driving-force behind the BBC TV’s highly successful whodunit drama Death In Paradise. So you know when he sets his mind to writing a novelisation, it is going to be the real-deal, fleshing-out the characters and locations he originally envisaged. Indeed Robert has so far published three books set on the Caribbean island of St Marie and there’s a fourth due later this year.

The latest you can buy right now is called Death Knocks Twice and follows his previous titles, “A Meditation on Murder” and “The Killing of Polly Carter”. The great thing about all of them so far is that Robert is continuing to develop the original detective from the television series, Richard Poole, who many will remember was portrayed by the besuited Ben Miller to brilliant effect. In the television version we are now onto our third detective.

Death Knocks Twice is an excellent concoction of characters and location, with a classic locked-room mystery at its heart. How and why was Freddie Beaumont killed in a room that apparently no murderer could have escaped from? Was it a member of his estranged family or an outsider seeking revenge for the darker days of his family history, who committed the crime? And why the title’s second killing with the victim apparently pointing directly at their killer?

Robert’s writing style is relaxed and open, easy to pick-up and put down as time allows. But it’s also full of all the necessary detail and subtle clues a whodunit needs, so you need to concentrate. A throw-away remark here or a passing description of an object there, might just be vital.

And of course the characters we know and love are there, just as we imagine them, Dwayne, Fidel and Camille, the Commissioner too. We get to learn more about the island and its history and the dark days of slavery that was at the foundation of many businesses in the area once upon a time. The island may be fictional but the social tensions a real illustration of what must be a reality.

We also get to learn a lot about basic forensics, the type of thing a keen amateur might be able to do without all the high-tech wizardry of modern science. Indeed Richard Poole goes back a long way to uncover a relevant clue, using technology from a bygone era, provided for him by an old FBI manual.

His team are as exasperated as ever at his unwillingness to eschew his formal woollen suit, something he believes befits his character and profession, while around him others dress more casually in the heavy heat of the Caribbean. There comes a point at which this all might change, a see-saw moment of will he, won’t he, just once, for the sake of his own sanity and that of his friends and colleagues. I’ll let you read for yourselves to discover what happens.

Of course at the end DI Richard Poole gets his perpetrator, after having interviewed everyone he can and sifted through all of the evidence. It’s a glorious process and thoroughly enjoyable. Satisfying in its conclusion and true to all the characters involved.

If you’d like a trip to a tropical island where the people and climate are laid-back and friendly, where there’s enough undercurrent to provide the basis for a baffling mystery or two, then anything by Robert Thorogood is to be heartily recommended, and Death Knocks Twice a very satisfying murder-mystery.


The Mystery of Three Quarters 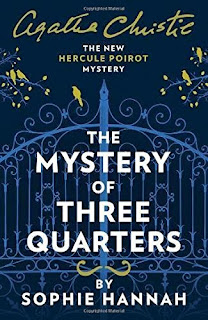 The latest Hercule Poirot reboot by Sophie Hannah, The Mystery of Three Quarters, is an ingenious new outing for Agatha Christie’s famous detective.

Here we have the classic country-house mystery populated by characters whose lives we feel we actually have a window onto, even if we don’t particularly care for them. Because this is a whodunit the author has to put various clues in place, dotted throughout, but not so deeply buried that the reader can’t recall them when the denouement comes and all is revealed.

Sophie Hannah carries this all off with aplomb. She paints vivid pictures of situations that aren’t overly cluttered or confusing but succinct and easy to grasp. The story moves along at pace and never gets bogged-down.

The crime here is initially hard to pin down and the characters sufficiently ‘woolly’ in their plausibility and alibis to all be possible suspects. Even the murder, when it is finally revealed, isn’t quite so straight forward.

This is the author’s third new outing for Poirot coming after The Monogram Murders and The Closed Casket set in the later years of his career, featuring his valet George. The original stories from this period read more darkly than the early ones. Poirot was perhaps more lonely, more solitary, a little depressed. Not so here. He now has lively sidekicks in the form of Inspector Edward Catchpool of Scotland Yard and the feisty Euphemia Spring, known as ‘Fee’, who runs the local coffee-shop.

The Inspector is a curious construct offering the necessary bridge with the Police system and a friend in the same first-person way Captain Hastings used to be. What’s more he appears to be Watson to Poirot’s Holmes, writing-up the cases for posterity. The coffee-shop is a place Poirot can’t help but return to, both for the quality of the coffee and the company he finds there.

Any criticism? Well nothing’s perfect. Nothing can actually be “Agatha Christie” except the Dame herself. Here the story is narrated partly in the first-person and partly the third. This I found a little odd at times, but over all it managed to work. There are a few scenes early on that I felt were too comedic, more Wodehouse than Christie, and I found them a little strange given the subject matter, but things soon got back on track.

This book and its convoluted plot is easy to recommend for all fans of the genre. The way it has been written is to make it somehow timeless. Yes, there are references to the year it is set in and capital punishment, but not many. The story could easily be set in any decade of the 20th century, even the 21st. That it is set between the wars is not always obvious.

A good, solid and satisfying mystery then, with characters that believe it or not, you feel will carry on their privileged existences outside of the book.

A recommended read for all fans new and old. You’ll find yourself smiling as you hear those famous Poirot phrases once more!


A Maigret Christmas - And Other Stories 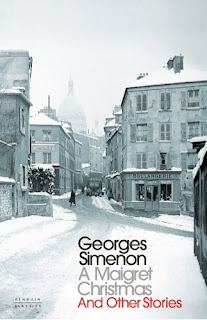 There are three short stories in this timely collection from Penguin Classics. The first is the eponymous:

A delightful and festive introduction to the Inspector Maigret character for those who may have heard of him or experienced the new television characterisation by Rowan Atkinson but never read any of George Simenon’s work.

Here we have a Parisian Christmas in the middle of the last century. A different time, with a different pace of life when the holiday was a much shorter affair and people celebrated in a simpler, less ostentatious way. Maigret and his wife are gearing up for a slow day of food and relaxation when neighbours bring around a mystery to solve. As the detective digs deeper into this unofficial case we learn much about the mutual respect and intimacy of this husband and wife team.

As with all good detective stories, this one is slow to unwind. Piece by piece the clues are unearthed and put together until the mystery is finally solved. The characters are sufficiently developed to make them interesting and not overburdened with obscure background that might just serve to confuse. There is a simpleness and freshness about Simenon’s writing - and the English translations presented here by Professor David Coward - that belies the clever plotting and detail. The reader is treated with uncommon respect by the author. He doesn’t try to confuse or confound or dig deep in to the human psyche; merely presents a mystery that needs explaining and entertains as he does so.

I’m not going to give the plot away but it works well. The reader doesn’t even know what crime, if any, has been committed at the beginning, just that a mysterious Father Christmas has turned-up in a small, grey flat on Christmas Eve with no sleigh or reindeer in tow. This single fact alone is all Maigret has to go on as he works his way to the surprisingly complex conclusion.

Penguin UK have released this collection in time for those long, cold nights over the Christmas holiday when a warm fire, a comfortable chair and a good book are the perfect way to spend dark evenings away from work, the weather and those High Street crowds. As an introduction to Inspector Maigret and his world, this is a very agreeable collection. 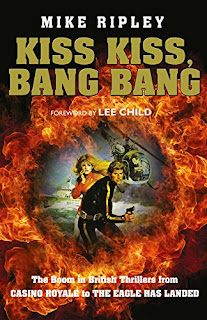 Definitely required reading for anyone interested in the history of the UK Thriller genre. Written by one of the most respected authorities on the subject, Mike Ripley. A writer with a friendly, open and engaging style, himself no mean author.

After World War Two there was grey austerity in Britain, a country building a fledgling health service, an expanded education framework, supporting a change in manufacturing from military to civilian, rebuilding transport infrastructure, still crippled by rationing. Not glamourous, not wealthy. And along came escape in the form of thriller writers who took us away from the humdrum and dour, from the cold and wet and gloomy, the workaday and predictable, and catapulted us into a world of fast cars, fast women, the glitz of the casino, the heat of tropical sun and dangerous living.

Mike takes us on a journey, as the cover says, from Casino Royale to The Eagle Has Landed. He tells us about the authors we know and a lot we don't. About stories we wish we'd read and others we're glad we didn't. The appeal of the thriller is that what we the reader expects changes with every generation. Here is a catalogue of those that stuck to the line and those who strayed over it into new territory. There is detail you never thought you needed to know, detail you somehow can't keep on reading without.

A riveting appraisal of a genre that continues to evolve and keep us turning the pages avidly.

Of course the book includes a section about Desmond Bagley and his great influence on the scene.